Press
ATLAS ELEKTRONIK UK
ATLAS ELEKTRONIK UK (AEUK) which is based in Winfrith, Dorset has completed a £13M contract to deliver the very latest in unmanned world leading minesweeping technology to Defence Equipment & Support for use by the Royal Navy.

AEUK has once again demonstrated its ability to develop, supply and support cutting edge technology by producing a system that includes an autonomous craft which features a “Sense & Avoid” capability enabling safe operations at sea whilst carrying out a range of military operations.

The benefit of this world leading modern unmanned sweeping systems is that it can safely clear military theatres of operation from sea mines, moving us towards a future where we can remove the “man from the minefield”. The benefits of this world-leading minesweeping system which features a wide range of capabilities is that it enables the Royal Navy to undertake consistently effective operations and mine clearance in challenging environments.

AEUK has proven credentials for innovation

A key factor in winning this competition was AEUK's ability to provide the User an advanced multi influence mine-sweeping system, in a wide range of selectable combinations, from a fully portable sea, road and air-transportable package.  Within hours of arriving in a theatre of operation, a small team can plan, configure and deploy the system and ultimately defeat complex mine threats.

As an unmanned and autonomous system this combination of an innovation and flexible craft with the very latest mine-sweeping technology delivers advanced, world leading minesweeping capability with greatly reduced risk to deployed personnel.  It can be operated from a Royal Navy ship, any other suitable boat or ship, or the portable command and control cabin both at sea and on shore.

Yet again AEUK continues to demonstrate its pedigree as a world leading organisation with an unparalleled and proven reputation for innovation in maritime defence technology.

“This autonomous minesweeper takes us a step closer to taking our crews out of danger and allowing us to safely clear sea lanes of explosives, whether that’s supporting trade in global waters and around the British coastline, or protecting our ships and shores. Easily transported by road, sea and air, the high-tech design means a small team could put the system to use within hours of it arriving in theatre. We are investing millions in innovative technology now, to support our military of the future.”

“The Mine Countermeasures and Hydrographic Capability Combined Influence Minesweeping system is the Royal Navy's first fully autonomous capability demonstrator and paves the way for the introduction of this technology across the full range of maritime capabilities.

“Combined Influence Minesweeping is a critical component of the Mine Countermeasures capability.  This autonomous system will restore the Royal Navy's sweep capability, enabling it to tackle modern digital mines that may not otherwise be discovered in challenging minehunting conditions.

“This autonomous sweep system represents a fundamental step in the Navy's transition to autonomous offboard systems to counter the threat posed to international shipping by the sea mine; we look forward to commencing demonstration of the associated minehunting system in 2019.”

“The autonomous minesweeper offers a commander the ability to defeat mines that cannot be countered by current hunting techniques and significantly reduces the risk to crew members in pressured and time-constrained operations.

“The system can offer greater flexibility and upgradability, allowing the Royal Navy to respond better to the sea-mine threat in the long-term and operate more effectively around the world.”

“AEUK are delighted to deliver to the MOD a world class Autonomous Minesweeping Capability to the RN.
The capability has numerous unique and innovative features: a COLREGs compliant USV; a multi-sensor fit enabling revolutionary “sense and avoid” autonomy; a novel, high-output Power Generation Module (PGM). This is coupled with a world-leading multi-influence sweep system, including an innovative towed coils system with an advanced acoustic source and sweep monitoring system, all contained within a secure system boundary.
The RN’s stringent requirements for an enhanced mine sweeping capability empowered AEUK to live up to its reputation for innovation and delivery of technically complex maritime defence technology. We are proud of everything the team in AEUK has achieved.” 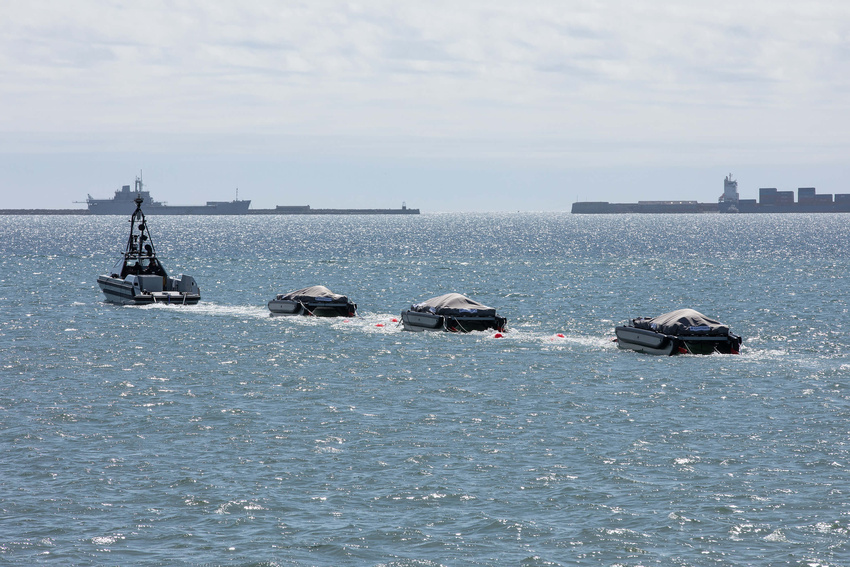