Press
On 3 March 2020, the frigate NORDRHEIN-WESTFALEN was handed over by the ARGE F125 consortium to the Federal Office of Bundeswehr Equipment, Information Technology and In-Service Support (BAAINBw).

Following the delivery, the “complete prerequisites for the operability of the ship” will be provided by the Navy and the future crew will receive further training on board. The NORDRHEIN-WESTFALEN is the second of four class F125 vessels being built for the German Navy under the leadership of thyssenkrupp Marine Systems. The lead ship of the frigate class F125, the BADEN-WÜRTTEMBERG, was handed over at the end of April 2019 and put into service in June 2019. The third unit is slated for delivery this year and the fourth in 2021.

Rolf Wirtz, CEO of thyssenkrupp Marine Systems: “The F125 is the most modern frigate in Germany and one of the most modern frigates in the world. Here we are implementing the concept of intensive use for the first time. This is unique worldwide. We are proud to make a significant contribution to the operational capability of our Navy and the defence of our country with these ships.”

The acceptance ceremony took place at the naval base in Wilhelmshaven. The ship had arrived there the day before from the shipyard in Hamburg. On board the NORDRHEINWESTFALEN, representatives of the F125 consortium and the Federal Office signed the acceptance documents. The Federal Office in Koblenz was represented by project manager Marc Steffens and the Head of the Acceptance Commission, Wolfgang Lotz, while ARGE project manager Christian Rogge from thyssenkrupp Marine Systems represented the industry. Delegates from the German Navy also took part in the acceptance ceremony.

By implementing the intensive use concept, class F125 ships can remain in the operational area for up to two years. This can considerably reduce the number of otherwise very long transit journeys. The completely redesigned vessels have highly complex systems and around 28,000 sensors that enable a very high degree of automation. This made it possible to reduce the required number of crew members by about half compared to previous frigate classes. Around 90 percent of the systems on board the frigates were newly developed specifically for this type of ship.

Besides the traditional tasks of national and alliance defence, the ships are designed especially for conflict prevention and crisis management as well as for intervention and stabilization operations in an international context. In addition to the ability to engage targets on both land and water, they also have air defence systems and helicopters specially equipped for submarine hunting.

ARGE F125 comprises thyssenkrupp Marine Systems as the lead company and the Bremenbased Fr. Lürssen shipyard. The pre-fitted bow sections were produced at the shipyards of the Lürssen Group in Bremen and in Wolgast on the Baltic Sea. Construction of the stern sections, the joining of the two vessel halves, further fitting-out, commissioning and testing all took place at the Blohm+Voss shipyard in Hamburg under the direction of thyssenkrupp Marine Systems.

Principal data of the F125: 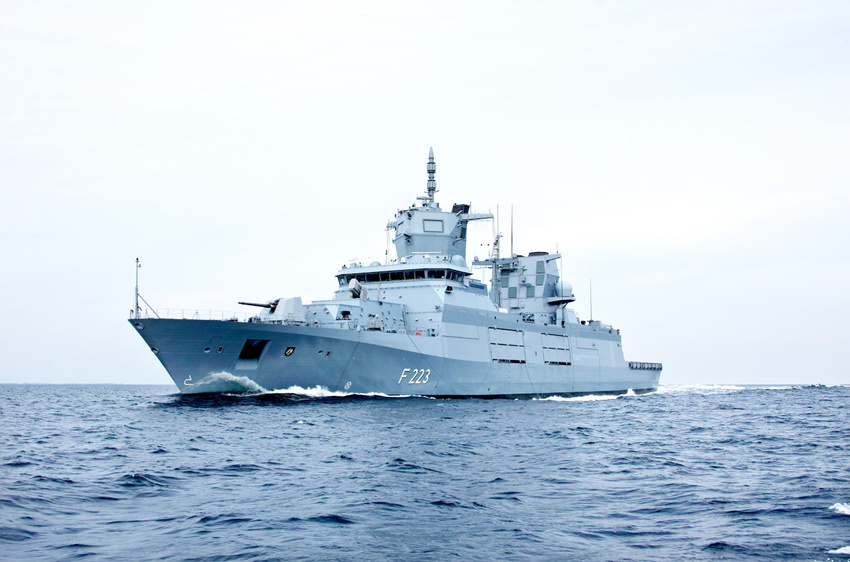