Press
ATLAS ELEKTRONIK
thyssenkrupp, its subsidiary Atlas Elektronik and Kongsberg joined forces and established a 50/50 joint venture company to shape the future combat systems of conventional submarines. The company named kta naval systems will be the exclusive supplier of combat systems for submarines from thyssenkrupp Marine Systems. This was announced during an official founding ceremony in Kongsberg, Norway, in the presence of high-ranking German and Norwegian Government officials as well as company representatives of all three partners.

Dr. Rolf Wirtz, CEO of thyssenkrupp Marine Systems:
“The cooperation goes far beyond the production of submarines for Norway and Germany. It is the starting point for a broader cooperation between European states in the procurement of submarines. With the new joint venture and following our acquisition of Atlas Elektronik we are now in the unique position to offer the full range of services for conventional submarines including design, development, manufacture and now also the centerpiece: the combat systems.”

German and the Norwegian governments had signed a government-to-government agreement at the end of June 2017 for the joint development, procurement, operation and maintenance of submarines and marine ordnance. Having received the request for proposal, thyssenkrupp and its partners are currently developing a detailed concept to offer four submarines to the Norwegian Navy and two submarines to the German Navy. It is currently planned to sign a joint contract for the new 212 Common Design (CD) submarines in 2019. Based on this, the submarines could be delivered from the mid-2020s.

Eirik Lie, President of Kongsberg Defence & Aerospace AS:
“The joint venture is an important step for us and the Norwegian defence industry. We have been partnering with thyssenkrupp for the past decades and are delighted to now take our partnership to the next level. Together we will deliver the next generation of combat systems and put smart defense in Europe into action.”

kta naval systems is operated through headquarters in Kongsberg, Norway and a branch office in Bremen, Germany. The newly founded joint venture company is owned 50 percent by Kongsberg and 50 percent by thyssenkrupp together with its subsidiary Atlas Elektronik. It is planned that the company will deliver the combat systems under a joint procurement program of the German and Norwegian navies for the new 212CD class as well as for upcoming thyssenkrupp Marine Systems submarines. A combat system enables the submarine crew to fully perceive their surroundings, identify objects and analyze the situation in detail. It consolidates all information to permit a rapid and reliable response.

In joining forces, cooperation between the German and Norwegian navies will not only reduce maintenance and training but also logistical efforts. The submarines will be based on the class 212A and specifically tailored to the requirements of the two nations. The class 212CD will combine the low signatures of the class 212A with extended range, speed and endurance to allow worldwide operations. 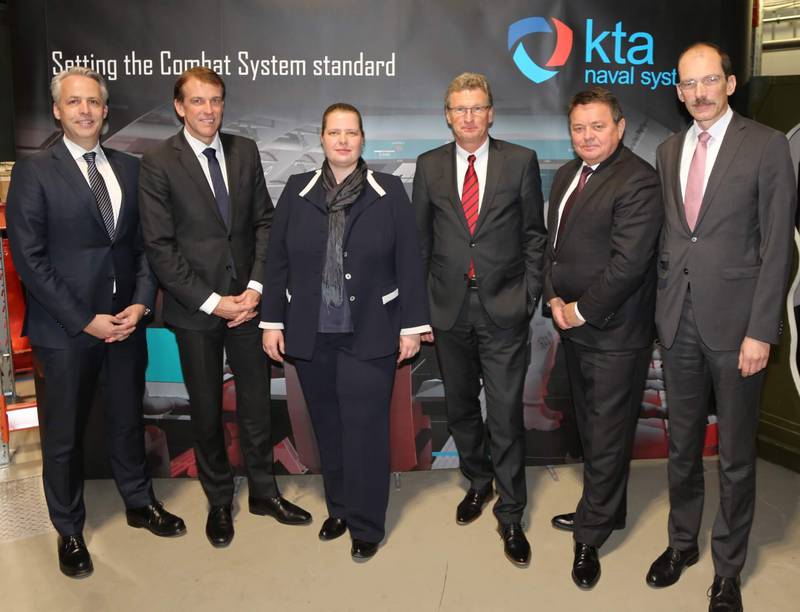