Press
ATLAS ELEKTRONIK Group
thyssenkrupp Marine Systems, Germany’s third-largest defence company and worldmarket leader in conventional submarines, has recorded a pleasing development: by2023, the company will be investing 250 million euro in Kiel. Its objective is to develop the shipyard into an international competence centre for conventional submarine construction. Thanks to the currently good development with new orders, around 500 new employees will be hired throughout the company by the end of 2020, the majority of them in Kiel. The company is looking primarily for engineers and skilled workers, particularly in R&D, construction and manufacturing.

On the way to becoming the most modern naval company in Europe thyssenkrupp Marine Systems offers the entire range of naval shipbuilding services from a single source: submarines, surface vessels and naval electronics. The company sets standards in surface shipbuilding and the development of new technologies. Over the next few years, numerous ultra-modern buildings with corresponding infrastructure are planned in Kiel, including a new shipbuilding hall for large-scale section production, a second outfitting line, a new stage system, a modernized service hall and a shiplift.

Dr. Rolf Wirtz, CEO of thyssenkrupp Marine Systems: “Our ambition is to be Europe’s most modern naval company. By making major investments, we are preparing our operations for the future. This comprehensive modernization program will strengthen the importance of our company as one of the most important employers in the region. Our recent successes show that there is strong demand for our products and services. We want to further strengthen this position.”

Daniel Günther, Minister-President of Schleswig-Holstein: “The shipbuilding and shipbuilding supply industry is the heart of the maritime economy in Schleswig-Holstein. The planned investments in Kiel demonstrate the future viability of the maritime industry. They are also a strong signal for the workforce and for the region. As the state government, we expressly welcome this.”

Positive development in all areas
thyssenkrupp Marine Systems has succeeded against strong competition in the surface sector recently: In August 2019, the company was contracted by an African
customer to build four frigates. The company is in charge of building Germany’s most modern naval vessels, the F125 class frigates. The “Baden-Württemberg” was commissioned by the German Navy in June 2019. In May of this year, the first of four state-of-the-art corvettes was christened for the Israeli Navy. In April 2019, Brazil selected the company as preferred bidder for the production of four corvettes. In Germany, thyssenkrupp Marine Systems is involved in the construction of the 2nd batch of K130 corvettes.

In addition, thyssenkrupp Marine Systems also has a strong service base: the company received its first order within a strategic framework agreement with Portugal for the modernization of submarines and surface vessels and an order for the modernization of an Indian submarine. In the field of naval electronics, the company also achieved a decisive breakthrough: the world’s first anti-torpedo torpedo was
successfully tested with the SeaSpider.

Increasing importance of electronics and digitalization
With the integration of ATLAS ELEKTRONIK, the development from a platform provider to an integrated system house was completed. The range extends from the conceptual design, construction, development and production to the integration of command and weapon deployment systems. Very few suppliers offer this in international competition.

Electronics are becoming increasingly important as a key technology: thyssenkrupp Marine Systems has introduced a new combat management system, ORCCA.
Developed by kta naval systems (a joint venture between thyssenkrupp and Kongsberg), it is the most advanced system currently on the market for conventional submarines.

Experience a digital tour of the expanded premises of thyssenkrupp Marine Systems in Kiel by app or on the following website:
App store “tkMS Standortkonzept” and
https://www.thyssenkrupp-marinesystems.com/en/press-releases.html 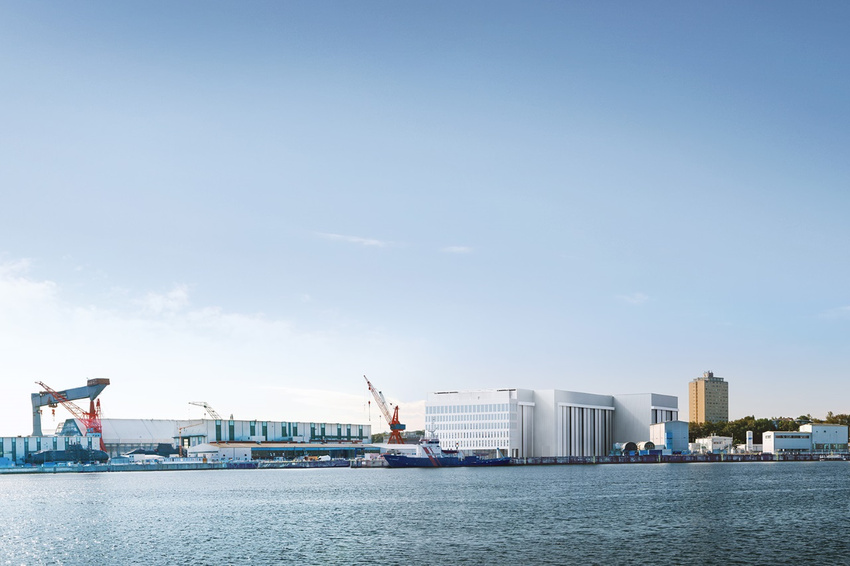